What is Digital Video? 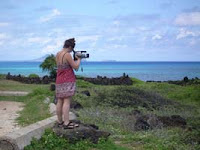 Digital Video 101
What is the DV format?

What about DVCAM and DVCPRO? DV (sometimes called MiniDV to help differentiate it), Sony DVCAM and Panasonic DVCPRO all have the same picture quality, as they all use the same DV video signal format. DVCAM and DVCPRO tapes are larger, can hold longer tape lengths and move faster through the camera during recording (which renders the tape less susceptible to noticeable playback errors from wear-and-tear damage). Because the DVCAM and DVCPRO formats are targeted at more professional users, these cameras typically sport better optics and accessories (and a higher price tag) than most MiniDV-format cameras.

What's the major advantage of shooting in DV? Not only does DV look good, it's also completely digital. This feature allows you to edit your footage (either deck-to-deck or by using a nonlinear video editing workstation) without any loss in picture quality. Typically, analog formats such as VHS and Hi-8 lose significant quality after repeated transfers/duplications; DV does not suffer this problem.

Are there any disadvantages to using DV instead of other video formats? Only if you're comparing DV to higher-end digital video formats (including Digital Betacam, D-9, Digital-S, D-3, D-1, HDCAM and so forth). These formats are not compressed 5:1 and are therefore capable of a better-looking picture (in the hands of an experienced camera crew, of course).

What's the difference between a 1CCD and 3CCD DV camera? Cameras with one CCD (charge-coupled device) rely on a single sensor to capture light patterns from all three primary video colors (red/green/blue). Cameras with 3CCDs utilize one sensor per color, however, and are therefore able to produce noticeably higher-quality images. You will most likely find a steep price division between 1CCD and 3CCD cameras (of any video format type).

What is the shooting ratio?

The shooting ratio of a film or video is the ratio between the total duration of its footage shot and that which results from its final "cut". A film with a shooting ratio of 2:1 would have shot twice the amount of footage that was used in the film. In real terms this means that 120 minutes of footage would have been shot to produce a film of 60 minutes in length.
Shooting ratios can vary greatly between productions but a typical shooting ratio for a production using film stock will be between 6:1 and 10:1, whereas a similar production using video is likely to be much higher. This is a direct result of the significant difference in price between video tape stock and film stock and the necessary processing.
Posted by Petra Daher at 11:31 AM